For those who suffer from dementia, loneliness can be a very real problem. And it seems that the problem works both ways, as healthy elderly people who feel lonely are more likely to develop the disease at a later date. Here we explore the relationship between loneliness and dementia, and how technology can help.

Why people with dementia feel lonely

Some of the main symptoms of dementia are memory loss, confusion, depression and changes in personality. Often these symptoms appear gradually and develop slowly, but each of them can result in the sufferer becoming more distant from those around them. As their mood changes and they become depressed they make less effort to reach out to friends, and confusion or memory loss can cause them to feel lost and alone as their surroundings and families become less familiar. People with the disease may also find that they are unable to do things that they once took for granted. They may have to give up their hobbies or find it more difficult to go out to meet friends.

Does loneliness leads to dementia?

In to a 2012 study, researchers found that older people who felt lonely were 64% more likely to develop dementia. This same increase in risk was not found in older people who were happily reclusive, indicating that it was ‘feeling alone’ rather than ‘being alone’ that increased the risk.

It wasn’t clear from the study whether feeling lonely made people more likely to develop dementia or whether their loneliness was actually an early indicator of the disease. However, it has been suggested that human interaction keeps the brain active and healthy, while loneliness makes it more vulnerable to the deteriorating disease.

While the main causes are age and genetics (as well as diet and overall health), the evidence suggests that keeping older people well-connected, less lonely and more mentally stimulated will help them to fight off the effects of dementia.

How can technology help? 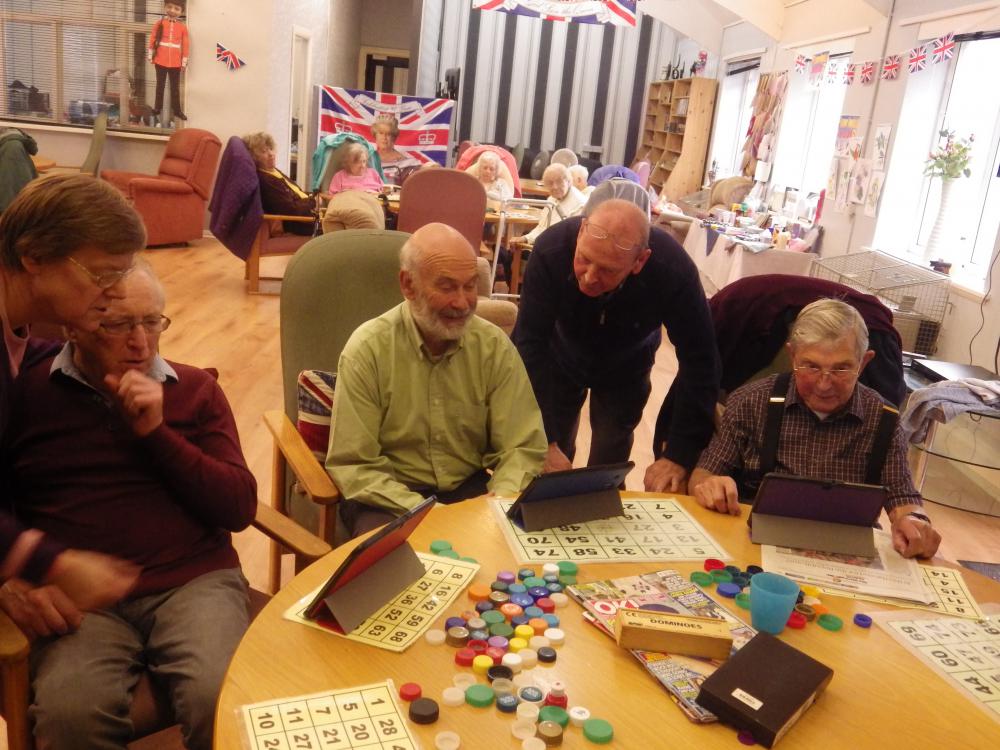 We work with a number of charities that support older people with dementia. Age UK Dacorum runs journey-mapping exercises to help people sufferers plan out regular routes, and Aapna Services teach computer skills so that they can stay in touch with family and friends who they can’t see in person. Here is some of the feedback that we have received from charities who use our tablet computers to tackle loneliness among dementia sufferers:

“The tablet computer is a very useful and adaptable tool to use to entertain people with dementia. E.g it has been used to play tenpin bowling, which encourages participation and competitiveness. At the hospital, two elderly ladies played and loved it and quickly adapted to playing the game on technology they would not normally come into contact with. Quiz games such as Guess the picture pairs and even more technical game applications have also proved successful.

The camera and photo galley are great for recording events and trips out, and then reminiscing at a later date. Photographs have also been produced to provide individuals with their own pictorial memories.

Tablet computers allow many diverse activities to be easily transported into the homes of service users. Thus far the tablet has proved to be a wonderful aid to entertain and amuse dementia sufferers and allows active participation and encourages interaction.”

“I would like to say that we are so grateful to you for allocating 2 Hudls a year ago, we have been doing life story work with our clients, taking photos and video to help them to remember the activities that they have been doing, we can find out info on the internet when having themed events and we play their song requests on Spotify. They have been a great resource in helping us to give good quality experiences of life and to maintain meaningful and purposeful activity. Life doesn’t stop with dementia.”

“The tablets are Godsend. Dementia sufferers are storing their photo memories, downloading their favourite music and listening to it at their leisure with the headphones. They have learned to Skype and FaceTime each other, and staff at the centre help them to do these things for fun.”

Simple guidelines on Blogging for the Age Action Alliance are available here.